The computer fridge hypothesis is a seemingly brilliant idea: store and operate your computer in a fridge, and wave good bye to all heating issues.

However — in 2015, a disappointing video appeared on YouTube: Linus Tech Tips once and for all rejected the computer fridge hypothesis by an experiment showing that refrigerators always loose in thermodynamic battles against modern computers.

The heat dissipated by the personal computer will exceed the heat absorption capacity of the fridge evaporator — causing the ambient temperature in the fridge to rise rather than fall. If we consider the system as a whole, we have a serious self-heating problem, and there is nothing we can do about it.

The ventilated computer fridge hypothesis is based on the following reasoning: If the fridge is equipped with a balanced ventilation system, most of the heat dissipated by the computer will be transferred out of the fridge, so there will be no self-heating. When the fridge is turned off, the system will simply function as a normal computer cabinet. Now, if we in addition route the in-air stream via the evaporator, the air will be cold when it hits the computer, thus absorbing heat from the computer on the way out of the fridge. See the sketch on the right.

I decided to test the new hypothesis, so I had to build my own computer fridge.

I bought a second hand mini-fridge with a glass door from TempTech on eBay as a starting point.

While the task of installing four fans in a mini-fridge is not the most pleasant thing a human being can do in the world — it can be done by some laborious drilling on the outside, and heavy angle grinding on the inside.

My friend Øyvind Colliander created a nice template for the drilling part. See the fan hole template below. The trick is to tape a printed template to the fridge wall, and use a punch and a hammer to mark the center of the holes before drilling. For the angle grinding, put on a face mask and cut out four squares on the inside aligned with the holes on the outside.

Result: two fans on the upper back (in-air), and one fan on each side (out-air).

In order to get full control of the fridge’s cooling system, I bypassed the internal thermostat and instead installed an Arduino micro controller and an external relay board beneath the back plate on the inside of the fridge. I also permanently installed the Arduino DHT-11 sensor to get ambient temperature and humidity readings. The sensor is placed in the bottom right corner of the fridge. I drilled holes on the backside for 230 VAC power and Ethernet, and installed a power socket, as well as two AC/DC converters (36 VDC & 12 VDC) on the inside.

Lighting and a Retractable Shelf

At this point, the fridge was ready to be tested, but for fun I decided to take the concept just a few steps further… Some lighting is nice, right? And — uh, a motorized retractable shelf for the computer! The latter turned out to be more challenging.

Basically, I used FreeCad to design a rack-and-pinion based retractable shelf. The design consists of three main parts; the rack, an old electric parabola antenna motor with a pinion, and a clamp to fix it to the shelf. Thanks to Andre Böehme for helping out with the toughest part — namely modelling the pinion and a matching rack tooth profile. I used i.materialise to 3D-print the parts. Great service!

To control the position and direction of retraction of the shelf, I combined two of the relays on the external relay board to achieve a polarity reversal switch.

The parabola antenna motor also has a built-in pulse counter circuit, which can be used to pinpoint its exact angular position. Basically, the circuit sends out short square pulses synchronized with the pinions angular movement. Position control is thus achieved by simply counting pulses with an analog input channel on the Arduino.

See below for a full (sloppy) wiring diagram of the system.

I installed the computer hardware on a Lian Li test bench placed on top of the retractable shelf in the fridge.

The software I developed for the computer fridge basically consists of three parts;

The code is available on Github: https://github.com/gknilsen/computer_fridge

The Computer Fridge Put at Test

Let’s run a series of tests to see if the computer fridge works. We will use the test scripts tests/deepfridge_logger_test*.py included in the Github repository. The test scripts log the following parameters to CSV files;

Some of the tests put the CPU and/or GPU to maximum utilization under certain periods — this is achieved by calls to stress and gpu-burn.

Description: The compressor is set ON, and the computer is left at idle the first 45 minutes. Then the computer CPU is put at maximum load for 5 minutes, followed by 10 more minutes at idle. Total test time is 60 minutes (3600 seconds). 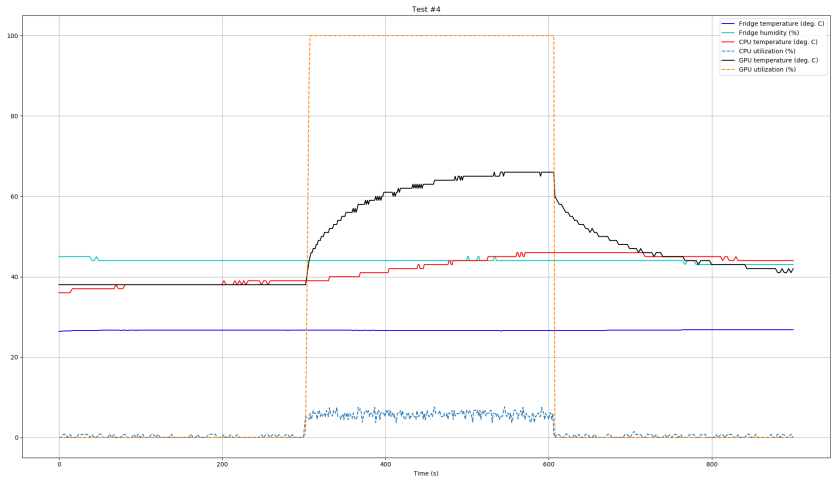 Description: The compressor is set ON, and the computer is left at idle the first 45 minutes. Then the computer GPU is put on maximum load for 5 minutes, followed by 10 more minutes at idle. Total test time is 60 minutes (3600 seconds). 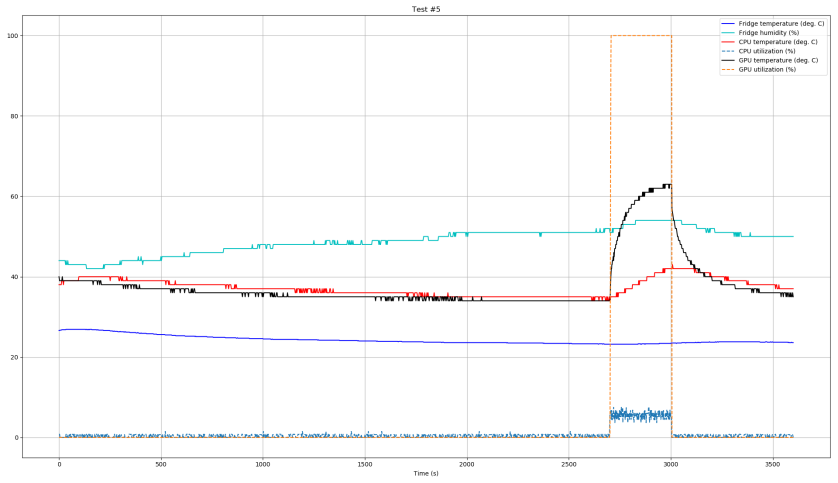 The tests show that there are no signs of self-heating, and that the CPU/GPU temperature drops 3-5 degrees Celsius when the cooling system has been activated for about an hour.

The ventilated computer fridge hypothesis has been confirmed!

However, is a temperature drop of 3-5 degrees Celsius worth the effort? Well, it depends. If you play around with overclocking and want to squeeze the most out of your system, 3-5 degrees Celsius might be enough. But is it really worth the effort? The system complexity is overwhelming, costly and not especially effective in its current state. However, the project was a great learning experience, and it was really fun! I doubt that I will run the cooling system much in its current state on a daily basis though.

There is plenty of room for optimization. In fact, currently I have not tested to see what happens if the cooling system remains activated for a longer period than one hour. Same is true for extended periods of maximum CPU/GPU utilization.

Please leave your thoughts in the comments section below. I am happy to receive ideas which can potentially improve the cooling performance of the system.

As a kid I was very fascinated by a particular type of electronic devices known as equalizers. These devices are used to adjust the balance between frequency components of electronic signals, and has a widespread application in audio engineering.

In this article I will explain how you can code your own audio equalizer, enabling you to integrate your own variant in your own projects. Let us start with some background information and basic theory.

Now, with an audio equalizer, you have the possibility to adjust the volume on any given number of  individual frequency ranges, separately.

An additional degree of freedom arises when the center frequency per slider also is adjustable. This is exactly what a parametric equalizer is: it lets the user specify a number of sections (think of section here as a slider), each with a frequency response adjustable by the following parameters: center frequency (f0), bandwidth (Bf), bandwidth gain (GB), reference gain (G0) and boost/cut gain (G):

A section is really just a filter — in our case a digital audio filter with the parameters corresponding to the elements in the list above.

The abstraction now is the following: a parametric audio equalizer is nothing else than a list of digital audio filters acting on the input signal to produce an output signal with the desired balance between frequency components.

This means that the smallest building block we need to create is a digital audio filter. Without going deep into the field of digital filter design, I will make it easy for you and jump straight to the crucial equation required:

To calculate the filtered output signal, y(n), all you have to do is to run the input signal, x(n), through the recurrence relation given by equation 1. In Matlab, equation 1 corresponds to the filter function. We will come back to it shortly, but first we need to get hold of the filter coefficients (a0, a1, a2, b0, b1 and b2).

At this point, you can read Orfanidis’ paper and try to grasp the underlying mathematics, but I will make it easy for you. Firstly, we define the sampling rate of the input signal x(n) as fs, and secondly, by using the section parameters defined above, the corresponding filter coefficients can be calculated by

Note that beta in equation 2 is just used as an intermediate variable to simplify the appearance of equations 3 through 8. Also note that tan() and cos() represents the tangens and cosine functions, respectively, pi represents 3.1415…, and sqrt() is the square root.

As an example, if we define the following section parameters:

It means that we will have a section operating at a 1 kHz sampling rate with a center frequency of 250 Hz, bandwidth of 40 Hz, bandwidth gain of 9 dB, reference gain of 0 dB and boost gain of 12 dB. See Figure 2 for the frequency response (spectrum) of the section.

Let’s say we have defined a list of many sections. How do we combine all the sections together so we can see the overall result? The following Matlab script illustrates the concept by setting up a 4-section parametric equalizer.

The FFT is then applied on the overall impulse response to calculate the frequency response, which finally is used to produce the frequency spectrum of the equalizer shown in Figure 3.

Consider equation 1 by evaluating it for n=0,1,2, and you will notice that some of the  indices on the right hand side of the equation will be negative. These terms with negative index correspond to the recurrence relation’s initial conditions. If we consider the recurrence relation as a one-go operation, it is safe to set those terms to zero. But what if we have a real system sampling a microphone at a rate of fs=1000 Hz, and where the input signal x(n) is made available in a finite length buffer of size 1000 samples — updated by the system once every second?

I will now give a practical implementation in C#. It consists of three classes

Let’s conclude the article by an example where we create a ParamtricEqualizer object and applies it on some input data. The following snippet will setup the equivalent 4-section equalizer as in the Matlab implementation above. 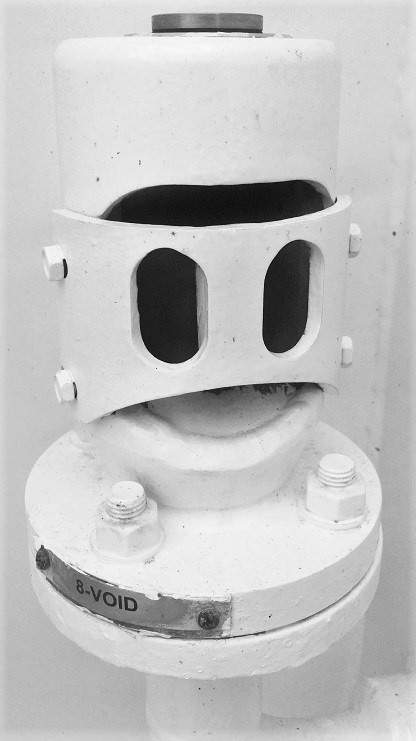